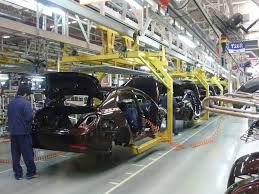 VW has announced it will begin manufacturing new cars on April 20th in Slovakia, this is the first new car manufacturing to begin outside of China since the CoVID-19 lockdown hit Europe. New car production began again in China at the beginning of April.
The motor industry has been hit hard in the coronavirus crisis, in China new car sales fell by 42% in the first quarter of 2020, in the same quarter new cars sales in the UK fell by 44%. In an effort to boost sales the Chinese government is offer consumers cash subsidies and tax incentives especially for greener technology such as electric and plug-in hybrid models.  So far no such incentives have been announced in Europe or the UK.
Vehicle manufacturing accounts for 10% of China’s manufacturing output and more than 40 million people earn their living from the industry as a whole. VW say they have learned valuable lessons to keep staff safe from infection whilst re-opening production in China and they are confident that they can keep staff in Europe safe from infection.
Provided the OEM’s can start the ball rolling with safe production it will be over to Governments to  incentivise the markets and we wait eagerly to hear their plans.
In addition to the Slovakia operations VW have plans to resume production in German, Portugal, Spain, Russia and the USA from April 27th.  South Africa, Argentina, Brazil and Mexico in May.

Flying During a Pandemic My Experience

Sign up to our newsletter for the latest Zezgo offers

HOW CAN WE HELP?

What can we offer you?